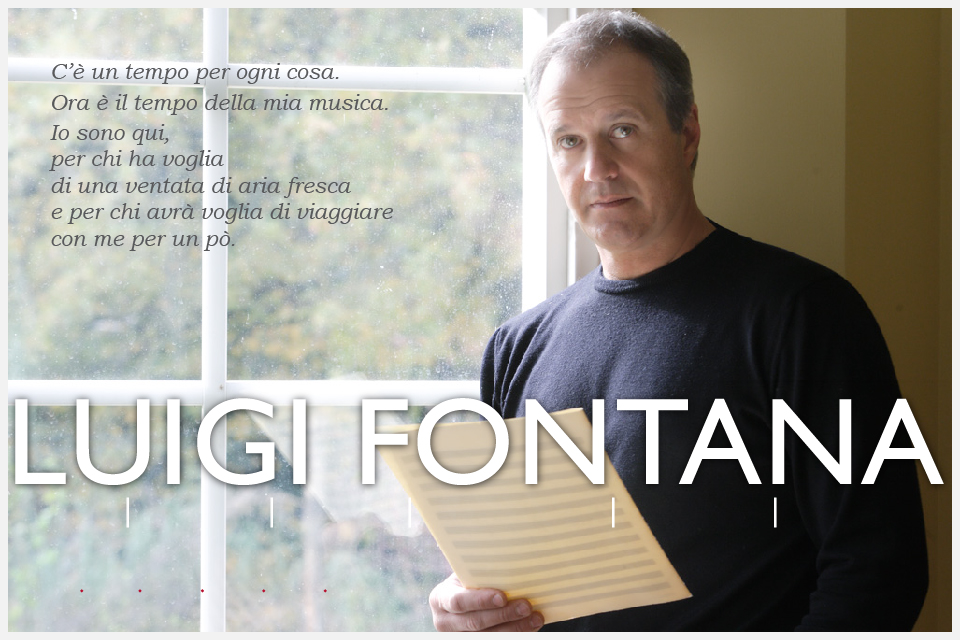 Luigi Fontana (stage name of Luigi Sbriccoli) is a singer/instrumentalist/composer and showman born in Macerata, Italy, February 16th, 1963 and living in Rome.

He is the eldest son of Jimmy Fontana, who was one of the most influential Italian singers/composers of the Sixties, renowned in Italy and around the world. Jimmy Fontana wrote and sang enormous hits, among them “Il Mondo”, published in over one hundred versions around the world (Engelbert Humperdinck in USA, Herve Villard in France, Il Volo and many others) and “Che Sara” made famous around the world by Josè Feliciano.

Luigi has followed his father’s career his entire life, first in their own professional recording studio in Rome, where they would play and compose together, then on stage performing around the world. Luigi first began on stage as a guitar player and vocalist (1982-1990), then as a pianist and backup singer, both in duet with his father, then as a solo vocalist (1990-2012). This is how Luigi learned “The Profession”… from his own recording studio to Italian small town squares, to principal theaters in big cities, innumerable TV shows and long tours in foreign countries including Australia, Canada, Argentina, Uruguay, Russia, France, Spain, Belgium, Switzerland, Eastern Europe, Africa and many appearances in the United States of America.
During these years Luigi also toured music clubs in Rome and all-around Italy, headlining in 5-star International Tourist Resorts and onboard luxury Cruise Ships.
Luigi is an elegant entertainer as well as an exciting performer.

After a few years away from the stage, the profound loss of his father and some “life adjustments”, Luigi is now back to his life as a Performer and much more, as an Artist. He is excited to be touring again in Italy, Europe and around the World, on land or sea, with three brand new 45 minute productions specifically tailored for cruise ship theaters, with his amazing Italian Theatre Show “L’illusionista e Altre Storie” and with a new 2-hour Show created for the Italian Summer Festivals; all is set for Luigi to return, so audiences everywhere may enjoy his emotional and soulful programs.
More info about the above-mentioned shows is available in the “Shows” section of this website.

Luigi Fontana was part of the Italian Rai TV Orchestra of Rome (lead and vocalist) from 1985 to 1999; he has sang on several Italian records as soloist. Furthermore, his voice has also been used by Disney for the Italian version of various animated musical films (1992-1998) and by Columbia Tristar Pictures for the Italian version of “The Swan Princess” the animated musical film (1994), as the male lead character singing voice.

Starting in 1998 Luigi began working as an Arranger and since that year he has arranged several songs for important Italian singer/songwriters. He has also learned the fundamentals as a professional audio engineer (Bruce Swedien Stages).